As you may know, I’ve been working on VK-GL-CTS for some time now. VK-GL-CTS the Conformance Test Suite for Vulkan and OpenGL, a large collection of tests used to verify implementations of the Vulkan and OpenGL APIs work as intended by the specification. My work has been mainly focused on the Vulkan side of things as part of Igalia's ongoing collaboration with Valve.

Last year, Khronos released the official specification of the Vulkan ray tracing extensions and I had the chance to participate in the final stages of the process by improving test coverage and fixing bugs in existing CTS tests, which is work that continues to this day mixed with other types of tasks in my backlog.

As part of this effort I learned many bits of the new Vulkan Ray Tracing API and even provided some very minor feedback about the spec, which resulted in me being listed as contributor to the VK_KHR_acceleration_structure extension.

Now that the waters are a bit more calm, I wanted to give you a list of resources and a small overview of the main concepts behind the Vulkan version of ray tracing.

There are a few basic resources that can help you get acquainted with the new APIs.

The basic idea of ray tracing, as a tool, is that you must be able to choose an arbitrary point in space as the ray origin and a direction vector, and ask your implementation if that ray intersects anything along the way given a minimum and maximum distance.

In a modern computer or console game the number of triangles present in a scene is huge, so you can imagine detecting intersections between them and your ray can be very expensive. The implementation typically needs to organize the scene geometry in a hierarchical tree-like structure that can be traversed more efficiently by discarding large amounts of geometry with some simple tests. That’s what an Acceleration Structure is.

Fortunately, you don’t have to organize the scene geometry yourself. Implementations are free to choose the best and most suitable acceleration structure format according to the underlying hardware. They will build this acceleration structure for you and give you an opaque handle to it that you can use in your app with the rest of the API. You’re only required to provide the long list of geometries making up your scene. 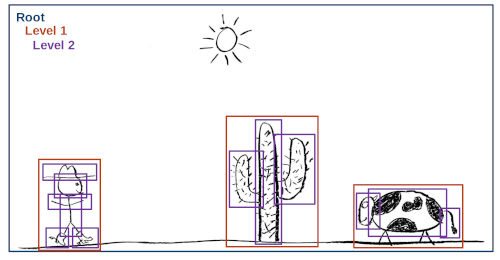 The whole idea behind this is that you may be able to build the bottom level acceleration structure for each model only once as long as the model itself does not change, and you will include this model in your scene one or more times. Each time, it will have an associated transformation matrix that will allow you to translate, rotate or scale the model without rebuilding it. So, in each frame, you may only have to rebuild the top level acceleration structure while keeping the bottom level ones intact. Other tricks you can use include rebuilding the top level acceleration structure in a reduced frame rate compared to the app, or using a simplified version of the world geometry when tracing rays instead of the more detailed model used when rendering the scene normally.

In its most basic form, you can access the ray tracing facilities of the implementation by using ray queries. Before ray tracing, Vulkan already had graphics and compute pipelines. One of the main components of those pipelines are shader programs: application-provided instructions that run on the GPU telling it what to do and, in a graphics pipeline, how to process geometry data (vertex shaders) and calculate the color of each pixel that ends up on the screen (fragment shaders).

When ray queries are supported, you can trace rays from those “classic” shader programs for any purpose. For example, to implement lighting effects in a fragment shader.

The full power of ray tracing in Vulkan comes in the form of a completely new type of pipeline, the ray tracing pipeline, that complements the existing compute and graphics pipelines.

Most Vulkan ray tracing tutorials, including the Khronos blog post I mentioned before, explain the basics of these pipelines, including the new shader stages (ray generation, intersection, any hit, closest hit, etc) and how they work together. They cover acceleration structure traversal for each ray and how that triggers execution of a particular shader program provided by your app. The image below, taken from the official Vulkan specification[2], contains the typical representation of this traversal process.

The main difference between the traditional graphics pipelines and ray tracing pipelines is the following one. If you’re familiar with the classic graphics pipelines, you know the app decides and has full control over what is being drawn at any moment. Your command stream usually looks like this.

Each draw command in the command stream instructs the GPU to draw an object and, because the app is recording that command, the app knows what that object is and the appropriate resources that need to be used to draw that object, including textures, data buffers and shader programs. Before recording the draw command, the app can prepare everything in advance and tell the implementation which shaders and resources will be used with the draw command.

In a ray tracing pipeline, the scene geometry is organized in an acceleration structure. When tracing a ray, you don’t know, in advance, which geometry it’s going to intersect. Each geometry may need a particular set of resources and even the shader programs may need to change with each geometry or geometry type.

For this reason, ray tracing APIs need you to create a Shader Binding Table or SBT for short. SBTs represent (potentially) large arrays of shaders organized in shader groups, where each shader group has a handle that sits in a particular position in the array. The implementation will access this table, for example, when the ray hits a particular piece of geometry. The index it will use to access this table or array will depend on several parameters. Some of them come from the ray tracing command call in a ray generation shader, and others come from the index of the geometry and instance data in the acceleration structure.

There’s a formula to calculate that index and, while it’s not very complex, it will determine the way you must organize your shader binding table so it matches your acceleration structure, which can be a bit of a headache if you’re new to the process.

I highly recommend to take a look at Will Usher’s Shader Binding Table Tutorial, which includes an interactive SBT builder tool that will let you get an idea of how things work and fit together.

The Shader Binding Table is complemented in Vulkan by a Shader Record Buffer. The concept is that entries in the Shader Binding Table don’t have a fixed size that merely corresponds to the size of a shader group handle identifying what to run when the ray hits that particular piece of geometry. Instead, each table entry can be a bit larger and you can put arbitrary data after each handle. That data block is called the Shader Record Buffer, and can be accessed from shader programs when they run. They may be used, for example, to store indices to resources and other data needed to draw that particular piece of geometry, so the shaders themselves don’t have to be completely unique per geometry and can be reused more easily.

As you can see, ray tracing can be more complex than usual but it’s a very powerful tool. I hope the basic explanations and resources I linked above help you get to know it better. Happy hacking!

[1] The Acceleration Structure representation image with the cowboy, cactus and cow is © 2020 Jason Ekstrand and licensed under the terms of CC-BY.

[2] The Acceleration Structure traversal diagram in a ray tracing pipeline is © 2020 The Khronos Group and released under the terms of CC-BY.