Intel NUC as a home server

By now you may have read my posts about finding and choosing an online backup service. Those cover the part about off-site backups. I’m also making changes to the way I do on-site backups. Recently, I bought an Intel NUC, model DN2820FYK that I’m using as my home server for that purpose.

Maybe I’m out of touch with the low-power PC community, but I only recently found out about these devices, which are one of the few ways to get your hands on a low-power Intel processor powering a “normal” PC, be it either a Bay Trail-M processor or a Haswell lower-power processor with the U or Y suffixes. The most efficient ones always use BGA and can’t be bought on their own.

So the solution Intel gives you are these NUCs. They’re aimed at the hobbyist market, because it requires work on your part, but at the same time they’re very easy to set up. You just need to buy the kit, a DDR3L memory stick (only one slot is available and the L is very important) and a 2.5" SATA hard drive. Optionally, a wifi adapter or antenna, I think, if you want to use wifi instead of its wired Gigabit port. You can then install an OS and use it as a normal computer by connecting it to an HDMI screen, USB mouse and USB keyboard.

Regarding the hard drive, all models come with a SATA connector, I think, but only the ones with taller boxes have room enough to fit a 2.5" hard drive inside. For some uses, the smaller models save space and can be booted from a USB stick in any case.

The following image shows the back of my device, with sockets for power, HDMI, Ethernet, USB 2.0 and audio. 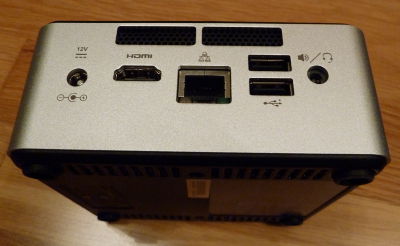 And this is the front of the device. As you can see, it’s a bit bigger than my hand. The socket on the front is a USB 3.0 port. 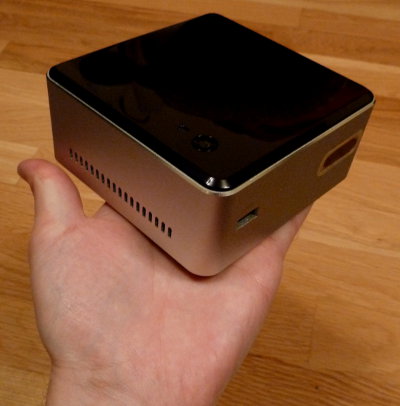 Compared to my Raspberry Pi, it has the following disadvantages:

But it has the following advantages:

The PC market may be dying, or at least shrinking, but I’m very glad Intel is selling these kits and I hope they continue to do so with future CPU models and microarchitectures. When the desktop computer I’m typing this text in dies, I think I’d be delighted if I could buy one of these to serve as my workstation. Right now the CPUs powering them are a bit underpowered, but Intel should be able to create, in a few years, a 2.5GHz low power quad core CPU suitable to be put inside one of these boxes.