Yesterday and two days ago David Simon, the creator of The Wire (which I reviewed here), was invited as a guest to the Celsius 232 festival that took place in my hometown, Avilés.

He participated in two sessions, one dedicated to his literary work covering the books Homicide and The Corner where Simon briefly told us about his career in journalism, including the whole year he was assigned to covering the work of the homicide unit in Baltimore, and how the Watergate scandal and the coverage the Washington Post made of the event influenced him heavily. At the end of this session we had the chance of being photographed with him and getting our copies of Homicide and The Wire signed.

Below, a picture of my wife, David Simon and me: 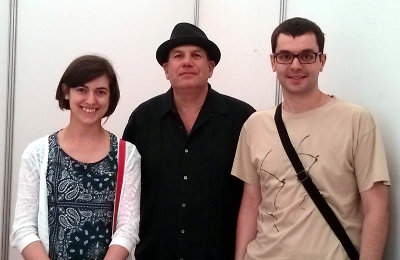 And our signed copy of the complete The Wire series:

The second session was entirely dedicated to The Wire and other works for TV in which he told us about his approach to writing fiction and how he prefers to put his stories in a real context and explore from there. He also mentioned his preference for drama and tragedy, as invented by the Greeks, because by watching others suffer and fight, we become more human.

At the end of the session there was a small time for Q&A where I couldn’t but wanted to ask him about his opinion on the NSA scandal and its media coverage, being totally related to the police and journalistic work depicted on The Wire.

Fortunately, Simon has already commented a bit on it in his blog.

I wanted to thank the Celsius 232 organizers for bringing him here and also Simon himself for his patience and kindness when talking to his fans.