This weekend, Crysis 2 is on sale on Steam and I have just finished the game for the second time, in the highest difficulty level. It’s a good moment for a review.

Crysis 2 is a classic FPS with very minor RPG elements, which are centered around collecting weapon attachments and "winning points" that can be invested in different nanosuit improvements. Nothing too complicated, so it’s still a FPS.

The story continues after the events of the first game and the action moves to New York, where you will have to battle aliens and also a human faction, just like in the first game.

Technically speaking, Crysis 2 is a very impressive game. It features good sound and superb graphics, with proper wide screen support even for triple-head displays out of the box. Crysis 2 looks great. Moreover, Crysis 2 will probably look better than any other game you’ve played on your machine. The game features 4 levels of graphics quality settings (high, very high, extreme and ultra) and it looks great on either one. In my medium-low gaming system (NVIDIA GTS250 and Core 2 Quad) it autoconfigured itself to very high and I played the game without issues at 1080p. Like I said, it looks way better than anything I’ve seen on this machine. The game engine squeezes performance out of your hardware and invests those resources where it really matters to deliver impressive visuals. 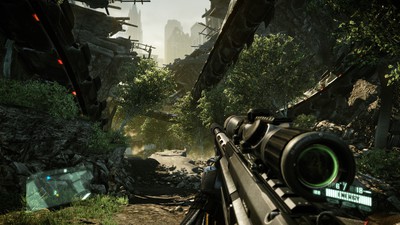 In technical aspects, the game should have gotten 10 out of 10 points, but it doesn’t reach that score mainly due to small bugs any player will find. It’s not about game crashes (I don’t remember the game crashing on me a single time), but about small details.

These small glitches, which still exist today and can be experienced by the common player, prevent the game from scoring higher technically.

Gameplay is the weakest aspect of the game, mainly because it pales compared to its impressive visuals.

Storytelling has improved, no doubt, over the first Crysis but, while the style is very cinematic and resembles an action flick, it’s still far behind other games.

Compared to Crysis, the game world is not so open. Take into account Crysis was the natural successor to Far Cry, and both games featured large levels with big open areas. In this sense, and I suppose this has to do with the amount of high detail textures and detailed level geometry, the gameplay in Crysis 2 feels like a more caged experience.

Game controls have been slightly simplified even if, being a FPS, they were not very complicated to begin with. Some people will not like this citing expressions like "consolification", but I don’t think they’re bad at all. Game controls have to be ergonomic and easy, and are not to blame for other game simplifications, should they be present. For example, the controls in Deus Ex: Human Revolution are simple and perfectly fine, IMHO, while the gameplay goes way beyond that of a FPS including many RPG elements.

Crysis 2 "feels" the same physically as the first game, which is a good thing, but some of those control simplifications work and others do not.

For example, not having to choose a suit special mode to perform power jumps (done this time by holding down the jump key) is a good decision. Having a special improved armor mode (default mode in the first game) makes sense too. Leaning left and leaning right have been removed and are now automatically handled by the "aim down the sights" button when being near corners or behind obstacles.

However, holding down the melee key to perform a power kick doesn’t work for me when in combat. I’d much prefer a key that can be simply pressed because enemies move too fast for that control to work.

While driving vehicles, aiming is controlled apart from movement. Like I mentioned in other reviews, Borderlands proved that simplifying this to merge aiming and driving directions is a very good idea.

Crysis 2 allows you to easily tune the FOV from the game console, but not from the settings menu, and making the changes persistent can be a bit problematic. I played the game with the default FOV, though, and didn’t seem to get motion sickness, but it did feel a bit weird from what I’m used to.

Finally, a very bad decision in my opinion is the lack of quicksaves. The game is saved automatically at some points and you can’t save in between. This can be very annoying sometimes. In some battles, you may want to take a sniper approach and eliminate enemies slowly one by one. Make one mistake with the last couple of them and you may end up having to repeat the whole scene, which could take 10 minutes or more. It’s also inconvenient when real-life events turn up. If you’ve only got 5 minutes left to play, you won’t know if you can make it to the next save point or not. Fortunately, this problem is slightly mitigated by the fact that you can Alt+Tab to your desktop and suspend the computer at any moment and the game will come back without issues. Still, I don’t see a real reason for quicksaves not to be implemented.