I have encountered a hardware problem that I’m unable to solve. It’s a long story, but here it goes.

The second computer is a desktop computer which sits in another room, and that we will be calling Computer D. It has a Creative Blaster External V.92 Modem (serial port) that we’ll call Modem D. It’s in a room which has a phone jack called Socket D, and it had a telephone cable and plug called Cable D.

One day, the modem in computer D was no longer able to connect to the Internet. As far as I know, nobody had touched anything related to the connection. I’m pretty sure I didn’t touch anything, and nobody else in the house touched anything either. As soon as I found out, I thought one obvious problem was that somebody had changed the password without noticing (it uses KPPP to connect). I retyped the username and password very carefully, even though the connection process didn’t apparently reach the authentication step. As I supposed, that was not the problem because it didn’t change anything. I thought the modem could be damaged due to a storm or something similar (a storm fried my previous modem). Taking into account modems are not very cheap (over 30 or 40 euros usually), I decided to check a couple of things before buying a new modem. The modem was able to detect the dialtone, apparently. When activating the modem sound, I can hear it dialing properly, but a continuous high-pitched beep starts after a few seconds, together with the normal background modem noise (bzzz…​). The "CONNECT" is never received, according to the KPPP logs, and the connection attempt timeouts after 60 seconds.

I then tried to discard a cable problem, so I replaced cable D with cable L. Both cables are normal telephone cables, as far as I know. Cable L is black and has a normal 4-pin RJ11 connector at both ends. Cable D is almost identical, as far as I could see, but in light grey. Cable L is a little bith longer and has the following text written on it: E157914 C <weird symbol that looks like a 9 and a U joined> AWM 20251 26AWG IA 60ºC 150V TLE. As I was saying, I tried cable L with computer and modem D to discard a problem in cable D. To my surprise, the modem connected and worked correctly with cable L. Just to be sure it hadn’t been a coincidence, I used cable D again and it failed as described above. I tried again cable L and it worked once more. I tried cable D and it didn’t work.

At this point, I was sure cable D was the problem, so I went to the supermarket and bought a similar cable the next day and got rid of cable D. Let’s call the new cable, Cable D2. I have cable D2 right here. It’s 2.1 meters long, about the same as the old cable D, but still shorter than cable L, and in white color. It doesn’t have anything written over it. I happily connected cable D2 to socket D and modem D, and tried to connect. It didn’t work. I got the exact same problem I had with old cable D. To discard concidences, I tried several times but I was unable to connect. I tried cable L again and it worked. I repeated the same tests a couple more times to confirm the results. At this point I was puzzled. The next thing I tried was to check cable D2 wasn’t damaged. After all, it could be bad luck and the shiny new cable D2 may have been broken too. I tested cable D2 with modem L and socket L, and it connected normally. So…​ cable D2 was not broken. Modem D is not broken because it’s capable of connecting everytime I use cable L. The only two components remaining were socket D and the phone jack in modem D.

If they were somehow damaged, maybe the plugs in cable L had something specific that made that cable successful. At this point in time, I noticed the plugs in cable L had something broken. The small plastic piece that goes "clic!" when you plug it in was missing in both ends. They broke long ago after plugging and unplugging the cable many times. So I broke them on purpose in cable D2. I tried it again, but was unable to connect. I tried both cable ends in both sockets and went as far as to make sure the cable was hanging in the air the same way cable L did. I carefully tested the cable several times but I was unable to connect with cable D2, while cable L kept working.

There is one obvious solution at this point, which is to forget about the problem and interchange cable L and cable D2. Cable L would be used with computer D and cable D2 with computer L. That’s not possible because cable D2, as cable D, is too short. To test it, I took advantage of computer L being a laptop and I put it closer to the socket D wall. However, it won’t reach where computer L sits normally and, furthermore, I wanted to know what the hell was going on!

So, from my point of view, everything boiled down to either socket D or the phone jack in modem D. I did one more test. I tried computer L (modem L) with cable D2 connected to socket D, and it worked without any problems. The only thing remaining is the phone jack in modem D, but I’ve been unable to connect with cable D2, even though I tried several times plugging it in harder, softer…​

The next thing I’ll do is to buy a longer telephone cable. I’ll try it again with modem D and socket D and, if it doesn’t work, I’ll use it with computer L and leave cable L there, so at least I’d have everything working. However, the mystery would still be unresolved. I don’t know why cable L works, why old cable D stopped working or why cable D2 doesn’t work either, when using them with modem D.

If you have experienced a similar problem in the past, or if you have new tests to suggest or a possible explanation, please contact me. Don’t hesitate to request further details if you want. I’ll provide as much information as needed.

I took 3 pictures showing the more relevant physical details, with notes about things I found interesting. Differences between cable D2 and cable L, and something slightly unusual in the phone jack of modem D. 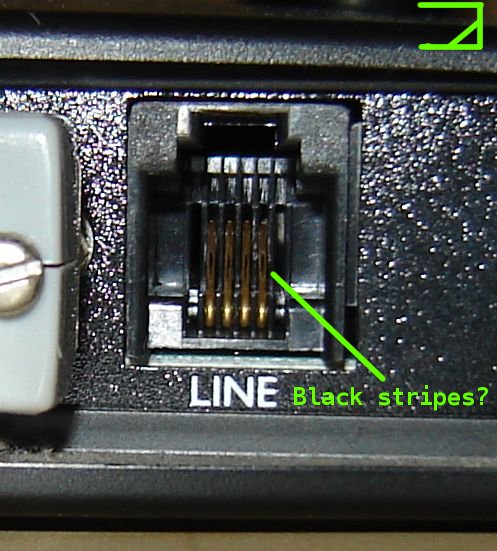 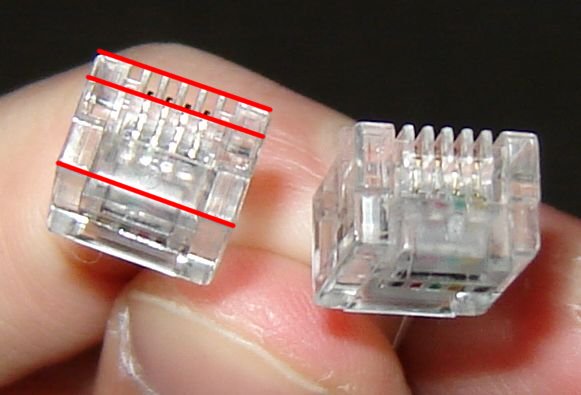 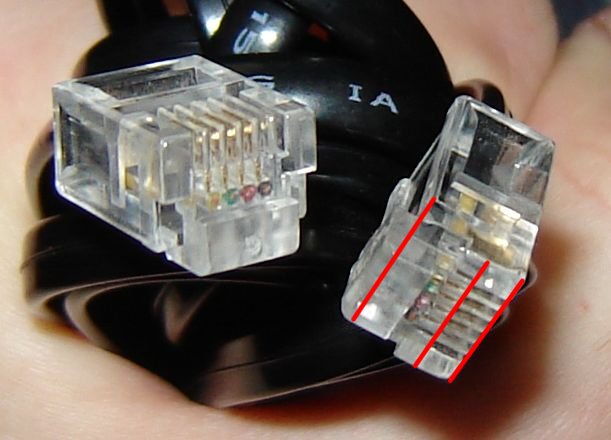 Several tests consistently confirm the following results, all of them taking place in the desktop computer room, with the wall phone jack from that room:

Can it be a problem in the old and new cables? I don’t think so because:

Can it be a problem with the internal modem components? I don’t think so because:

Can it be a problem in the wall phone jack? I don’t think so because:

Can it be a problem in the modem phone jack? That’s the current most viable explanation, but it works using the laptop cable for some reason. Maybe it’s only half-broken and the laptop cable has something special the other cables don’t have and that makes it work?

I just bought a new long cable (let’s call it D3) that I’m going to use with the laptop, while I keep cable L with modem D, because it’s the only one to work.

Someone called Jeff was smart enough to observe that cable L is different to the other cables in that its plugs are also reversed 180 degrees. This raises several questions. Is that important in analog telephony? Is that why cable L works? How could cable D work previously? Why did cable D stop working then? Cable D may have been like cable L and when it stopped working, it could have been genuinely broken. I then bouth cable D2 but it didn’t work because it was not reversed. If that’s the case, new question: why does cable D2 work when using it with the laptop? Tough questions.